Our First Canada Day in Moncton, and what a lovely time it was! The City’s “Whoa Canada” day of activities took place along the riverfront, one of the best gathering spots in the community.  The entire waterfront was a sea of red and white with thousands turning out to mark Canada’s 148th birthday. The City of Moncton did not exist when Canada was born, but the province of New Brunswick was a key player in Confederation. Initially, New Brunswick led the charge for a maritime union with Prince Edward Island and Nova Scotia. When the Province of Canada (Ontario and Quebec) requested to take part in the meeting, talk soon turned to forming the country of Canada. In 1867, three years after the historic Charlottetown conference, the country of Canada was formed.

I am willing to bet the Petitcodiac River looked very much back then like it does today. Muddy water rising high and then dropping low, swirling pools winding their way down to the Bay of Fundy. During today’s celebrations, the tide was low. Soon the tidal bore will make its way along and the gushing water will rise to the river’s edge. The river is certainly an active member of this community.

Today, parents, teenagers children and family pets are enjoying the day along the banks. The riverside trail, normally used by runners and bikers, is now a sea of bouncy castles and food vendors – ice cream, PEI potato fries, poutine, and fish and chips

Hanging along the banks of the Petitcodiac River.

A parking lot full of food trucks adds some diversity to the traditional maritime offerings – Thai food, Mediterranian fare and German sausage that caught my eye. While the City’s ethnic communities are not front and center, these food trucks hint at a growing community that is becoming more sophisticated in its culinary tastes. 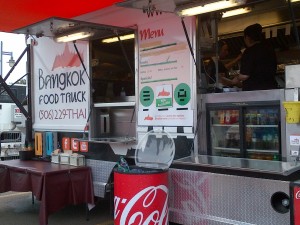 One of my favourite food trucks in the City. International flavours indeed!

I’ve been fortunate to attend many Canada Day ceremonies across this country – in Newfoundland, Canada’s youngest and most easterly province; Ottawa, Canada’s captial; at the Toronto’s CN tower; and in Charlottetown in 2000, the millenium year.  In comparison, Moncton’s Canada Day activities certainly didn’t disappoint.

There were plenty of good food options and and many fun family activities, including a kids zone with puppetry and other performances.  Shop vendors sold everything from patriotic t-shirts to air-brushed tattoos.  The larger stage featured musicians who represented New Brunswick’s English and Acadian cultures.  The night ended with a performance from classic Canadian band Trooper, along with a great fireworks display. 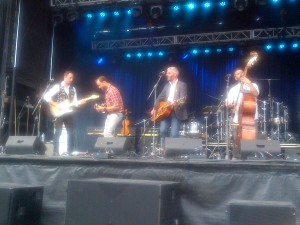 The Backyard Devils got everyone up and dancing. Iconic Canadian band Trooper were the headliners.

The best part? The friendliness and laid-back attitude that accompanied the events. Acadian and English, old and young. Everyone was there to have fun.  A great day in a great city.